Catalyst for Growth, Path to a Just Energy Transition: The Promise of LNG in the Republic of Congo

There’s no question that Africa’s energy industry is under assault from Western climate activists. Not only are they pressuring the continent to leave its vast hydrocarbon resources untouched rather than using them to unlock much-needed economic growth, but they’ve also convinced many financial sponsors to withdraw support from African fossil fuel production.

As the Republic of Congo is about to prove, however, there are ways to monetize vast natural gas discoveries while also helping to decarbonize the world’s energy mix. What’s more, the same effort has great potential to increase the availability of electricity to the Congolese and reduce Europe’s dependence on Russian energy.

That’s a lot to expect, but the four-way win is the promise of a new liquified natural gas (LNG) project being developed in Congo through an agreement with Italian oil and gas company Eni.

The April 2022 deal is the first to follow the launch of the Congolese Ministry of Hydrocarbons’ Gas Master Plan (GMP). The plan’s purpose is to facilitate and optimize utilization of the country’s natural gas resources, including associated gas, which is gas produced in oil wells. Associated gas is often flared, contributing to greenhouse gas (GHG) emissions.

Eni said it will accelerate and increase gas production in Congo by deploying a pair of modular, midsize floating LNG liquefication units with a combined capacity of around 2 million tonnes per year in its Marine XII block offshore Congo. It is hoped that the facility, which will provide LNG for both export and domestic power generation, will revitalize Congo’s hydrocarbon sector and shift its revenue reliance away from crude oil exports. Startup is expected in 2023.

Eni, which calls itself “the only company committed to developing the huge gas resources of the Republic of Congo,” — amounting to some 238 billion cubic meters (bcm), the seventh-largest reserves on the continent — is hardly a newcomer to the area. In fact, Eni’s presence in Congo reaches back more than 50 years. It currently delivers gas from Marine XII to two onshore thermal power plants that generate 70% of the country’s electricity.

In addition to providing the Congolese with access to energy, for decades Eni has trained local staff and created integrated production chains for the domestic market. The company has focused on improving community health, promoting biodiversity, and celebrating local culture and art. Together with the United Nations Industrial Development Organization (UNIDO), Eni is collaborating on renewables, energy efficiency, technical education, youth employment, and the agricultural value chain.

Why the emphasis on LNG? For one thing, it’s widely considered the cleanest fossil fuel, making it important in this phase of the energy transition while greener energy sources are being commercialized and the use of coal is diminishing.

Driven by growth in power generation and industrial demand, especially in developing countries that need more energy rather than less, the market for LNG is expected to rise by as much as 50% by 2030.  That translates to tens of thousands of jobs at every LNG facility, along with an increase in the economic activities that follow job creation. Being considered a “transitional fuel” is just one of the things LNG has going for it.

Equally important, LNG is easy to transport long distances from producing basins to markets around the world. With the United States, China, Europe, and much of Asia counting on LNG volumes sourced from Africa as part of their efforts to reduce greenhouse gases, having long-range access is a significant advantage. In addition, in areas where there is existing natural gas pipeline infrastructure, such as from northern Africa to Europe, and established export relationships, African LNG is regarded as a ready alternative, especially given the ban on Russian imports. Those exports are bound to improve national, regional, and local economic productivity — and, ultimately, to lift entire families out of poverty.

There is another critical way LNG development in Congo and elsewhere can help everyday Africans, however, and that’s by providing a source for domestic electricity.

The projects are coming on board when Africa is at a crucial point in its demographic development — and while it struggles to access energy, particularly clean forms. The continent’s population is projected to reach 1.68 billion people by 2030. That’s 42% more than the 2015 figure. Yet today, less than a quarter of all sub-Saharan Africans have access to electricity. In Congo, the number of households with electricity is about only 1.6 in 10. As the population grows, increased demand for electricity is inevitable. Economic development depends on it.

LNG can help fill that gap. It’s currently believed that, as a source of energy for electricity generation, LNG could grow from 10% of installed capacity in 2015 to 23% by 2030.  That’s a significant increase in just 15 years.

A Series of Successes 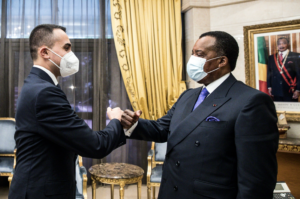 the latest African nation to join the series of countries that have benefited from the LNG opportunity.

Although Algeria is the continent’s de facto LNG pioneer, with first production in 1964, and Nigeria has seven LNG facilities, its first dating to 1989, there’s been a swell of sub-Saharan LNG-related initiatives this century.

Among the gas-rich African nations participating in the escalating LNG market is Equatorial Guinea, which delivered its first cargo of LNG from a terminal at Malabo in 2007. More recently, the country confirmed its plans to participate in other areas of the LNG value chain, announcing in 2019 that it would build West Africa’s first LNG storage and regasification plant

Angola hasn’t lagged Equatorial Guinea by much, however. Construction of the Angola LNG plant began in 2008, with first cargo delivered to Brazil in 2013. The facility is notable because it is wholly supplied with associated gas, meaning it significantly contributes to the environmental goal of eliminating flared gas.

Cameroon became an exporter in 2018, processing as much as 1.4 million tonnes per annum (mtpa) from the Hilli Episeyo floating LNG (FLNG) vessel, a converted tanker. A second FLNG is expected to be commissioned offshore Cameroon next year.

All told, those four sub-Saharan nations — Nigeria, Equatorial Guinea, Angola, and Cameroon — have as much as 33.8 mpta of LNG export capacity. Add the potential of existing and planned projects in Mozambique, Tanzania, Ghana, and Mauritania-Senegal, and regional capacity could reach 134 mpta by 2030, if market conditions allow. The continent is forecast to increase its gas output from about 260 bcm in 2022 to as much as 335 bcm by 2029.

As for Congo, the African Energy Chamber’s State of African Energy Q2 2022 Report suggests that flows from Marine XII and incremental LNG should reach nearly 4 mtpa by 2030.

It has been encouraging as well to observe the fantastic working relationship OPEC President Bruno Jean-Richard Itoua, Minister of Hydrocarbons of the Republic of the Congo and Maixent Raoul Ominga, Director General of the Société Nationale des Pétroles du Congo (SNPC), Congo’s national company. The cooperation and respect among these leaders can only work in Congo’s favor in getting gas deals done. I saw it first hand when they worked together with me in supporting African Energy Week in Cape Town and other issues that are needed to grow the oil and gas sector.

It’s safe to say, then, that Congo is closing in on its LNG export dream, the African Energy Chamber 2022 Q2 report says. And it’s doing so even amid criticism by the National Resources Defense Council and others that say using LNG in place of other fossil fuels is not an effective way to reduce planet-warming emissions — even during the transition to renewable energy sources.

In other words, these groups are suggesting that the natural gas that could change African lives should be left in the ground.

I know I’m not the first to ask: Is it fair to deny everyday Africans the opportunities enjoyed by the rest of the world, just because those opportunities arise from the exploitation of even the cleanest fossil fuel?

The irony that fossil fuels literally powered the industrial and financial development of the countries that are home to the harshest critics of Africa’s oil and gas aspirations is wasted on no one. The fact that sub-Saharan Africa still wrestles with energy access, that families there still rely on polluting biomass to cook, that the number of people denied the “luxury” of electricity there is approximately 600 million and growing, only makes the urgent calls rush Africa’s energy transition harder to hear.

Congo is closing in on its LNG export dream. I say congratulations. And more power to them.