By now, I’m certain that many of my readers are quite aware of the massive economic potential of Africa’s natural oil and gas reserves. Many African countries sit upon an inordinate layer of abundant energy that stands to bring prosperity to its people, the country, and even the global community as a whole.

But as many energy titans and political leaders in the world begin to turn their attention toward renewable energy sources, African countries will have to have their own solution that can be brought to the global table.

Although there is great potential for African countries to leverage their abundant energy resources, the continent’s unique and varied geographies also offer significant opportunities in the developing renewable energy sector as well.

In the interest of presenting both sides of the situation, I thought it would be prudent to explore some of the best renewable energy choices for African countries as the world accelerates its transition toward renewable energy.

In particular, we’ll talk about the potential for Africa to develop strong programs for both wind and solar energy.

The Viability of Wind Power in Africa

Wind power is a unique source of renewable energy that stands to benefit many areas of the world that don’t have access to electricity. But as a technology, it presents challenges to overcome in both African countries as well as many others around the world.

Of course, the first issue with wind power is simply having the installation built in an area that will capture energy from regular windy patterns. For this reason, wind power is often discredited as only being able to provide “intermittent” power, as it’s largely contingent on the weather conditions in that area.

While true, this isn’t an entirely fair criticism of wind power — as consistent hydroelectric power is also determined by the regular flow of water, which is often contingent on rain and snow patterns in the surrounding area. 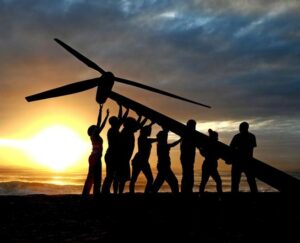 Thus, like most renewable energy initiatives, the success and viability of wind power in Africa will be determined by science’s innovations in energy storage. Battery technology and energy storage today is leaps and bounds beyond what it was even 10 years ago. At our projected rate of development, it’s not unreasonable to expect our ability to efficiently store energy to greatly improve in even the next five years.

This will help pave the way for more successful wind farm installations, as there will be little to no waste from the energy they generate.

Speaking to Africa specifically, there are already several countries exploring wind farm projects and generating GWs with high reliability. According to an April study by the International Renewable Energy Agency (IRENA), Morocco, Egypt, and South Africa have already installed more than 1 GW of wind energy capacity.

There will be economic hurdles to overcome in installing further wind energy projects across Africa, including the cost of building the power lines that will take the captured energy to countries that need it most.

Wind energy does uniquely serve as a strong counterbalance for solar’s daytime energy capture, as most high winds in Africa blow through the night.

Harnessing the Power of the Sun

While wind energy is an emergent opportunity for any country looking to develop more renewable energy programs, solar is currently the renewable source with the most proven success and rapid innovation.

In a publication from the WEF (World Economic Forum), the solar energy potential in Africa is quite significant. Studies have been conducted globally that aim to determine the average potential of solar energy around the world, and many believe that Africa could well lead the charge.

When it comes to measuring solar energy potential, the figure of 4.5kWh/kWp (kilowatt hours/peak power) per day is described as excellent conditions for solar power.

Deeper investigation reveals that Africa’s average long-term yield for a solar energy installation is 4.51 kWh/kWp per day — just above the threshold for excellent conditions. 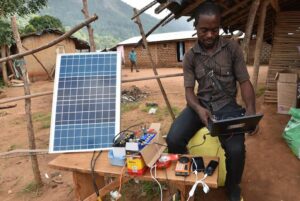 From a natural resource perspective, Africa has no shortage of sun to harness for electricity. Solar panel installations have also greatly grown in efficiency and could unlock energy potential and transformation for African countries that need it most.

The greatest obstacles to overcome will be regulatory, as not every African country has the right economic and political climate to accept such a large-scale renewable energy installation. It is partly for this reason that a just transition toward renewable energy will need to be pursued gradually and incrementally, as many African countries rely on their existing natural resources for energy.

Moving in the “Right” Direction

However, this phenomenon is no reason not to pursue a common goal together. The world is expressing greater demand for renewable energy, and I believe that African countries will have a great role to play in that initiative. 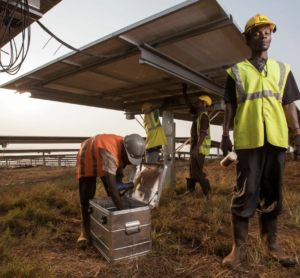 Wind and solar energy are just two of the renewable sources that Africa can bring to the table, but it will take time to work toward that end hand-in-hand with world leaders.

In the meantime, I believe that we ought to leverage the resources that we possess currently in-hand while we work proactively to develop our solutions for the future